The photo was taken two years before Meghan met Harry

An old photo of Meghan Markle posing with a Kate Middleton magazine cover is fascinating fans all over social media.

A Meghan Markle fan account on Instagram posted the rare snap of the Duchess holding a copy of U Magazine with her future sister-in-law on the cover.

END_OF_DOCUMENT_TOKEN_TO_BE_REPLACED

At the time, Meghan was working as an actress on the legal drama Suits.

Two years later, she met Prince Harry, and the rest, as they say, is history.

Many on social media used the image to discredit Meghan's previous statement that she "didn't research" the royal family before she met Harry, though holding a magazine hardly constitutes "research". 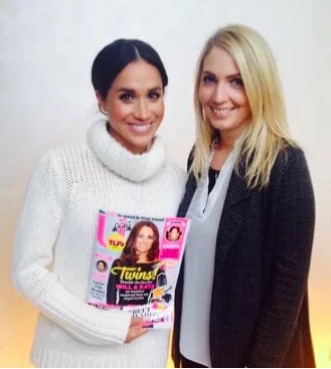 END_OF_DOCUMENT_TOKEN_TO_BE_REPLACED

In reality, Meghan was featured in the magazine, and posed with it for promotional reasons. It just so happened that her future sister-in-law appeared on its cover.

The relationship between Meghan and Kate Middleton has long been a source of fascination for the press. Fans of Meghan have pointed to the hypocritical way she is treated in comparison to her sister-in-law.

For instance, the Daily Mail praised Kate for "tenderly" cradling her baby bump. When photos emerged of Meghan doing the same, the headline questioned whether she was doing it out of "pride" or "vanity".

Similarly, the Express acknowledged that Kate ate avocados as a "cure for morning sickness". However, they ran a headline that linked Markle's preference for the fruit to "human rights abuse", "drought", and "millennial shame".

END_OF_DOCUMENT_TOKEN_TO_BE_REPLACED

Meghan addressed the apparent "feud" during her tell-all interview with Oprah Winfrey earlier this year. The Duchess acknowledged that they did have a disagreement over bridesmaid dresses, but they subsequently made amends.

She told the legendary chat-show host that the press "really seem to want a narrative of hero and villain".

popular
Irish girls name was the most used Irish name in the United States last year
Why Are Men so Obsessed With Boobs? The Answer is Pretty Surprising...
Here Are The Top 20 Most Common Pin Codes in The World
Idris Elba and Sabrina Dhowre confirm they have welcomed a baby boy
Miley Cyrus responds to rumours she is expecting her first child
Two of the Peaky Blinders gang are actually brothers in real life
So are we dating?... 10 signs it's time to define your relationship
You may also like
2 weeks ago
Harry and Meghan release brand new picture of Lilibet to mark 1st birthday
4 months ago
The dress Meghan Markle wore in her Oprah interview is going into a museum
4 months ago
Turns out, the Duchess of Cornwall had a rather harsh nickname for Meghan
4 months ago
Prince Harry reveals he "does not feel safe" coming back to the UK
4 months ago
Prince Harry and Meghan Markle concerned over Spotify misinformation
5 months ago
Cardi B wants to have "a chat" with Meghan Markle after defamation lawsuit
Next Page