He left the cobbles back in February.

But it looks like Coronation Street's Adam Barlow is going to be back in Weatherfield pretty soon.

The long-running soap shared its Saturday Sneak Peeks, a behind-the-scenes glimpse at what they have been filming over the last few days.

END_OF_DOCUMENT_TOKEN_TO_BE_REPLACED

Eagle-eyed fans began to celebrate when they noticed Adam in one of the shots, playing tabletop football in Weatherfield's new barber shop.

The solicitor left town back in February, after he found himself caught up in some major drama with Sarah Platt and Gary Windass (who are looking very tense in the behind-the-scenes photo they're in).

He decided he needed a change of scenery and was going to go travelling for a few months, before taking off in a taxi.

Take a look behind the scenes in our Saturday Sneak Peeks. 👀 🎥

What do you think we've been filming this week?#SaturdaySneakPeeks #Corrie #BehindTheScenes pic.twitter.com/ZsK0qRVMFi

Following his 'exit' back in February, fans began to wonder if we would ever be seeing Adam on our telly screens again.

But Coronation Street was quick to assure them that he would only be away "for a little bit".

END_OF_DOCUMENT_TOKEN_TO_BE_REPLACED

The news comes a few weeks after it was confirmed a new family - the Baileys - would be moving to Weatherfield this year.

The family - Edison (or Ed), Aggie, and their sons Michael and James - will be moving into No. 3, having bought the house from Norris.

They'll be appearing on our telly screens (and walking into Weatherfield) from early June. 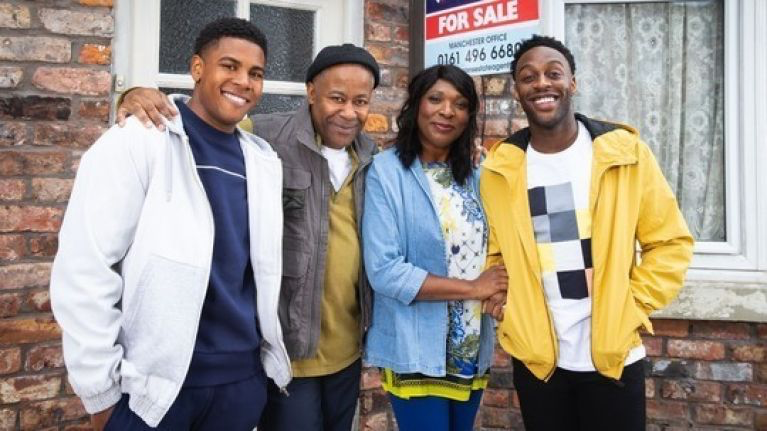 "I am really excited to introduce this new family - the audience is going to love them! They’re funny, warm and will pull together through thick and thin as we play out the stories we’ve got lined up for them.

"Parents Edison and Aggie are soulmates who, underneath the banter, will stick up for each other and defend their boys when the going gets tough.

"Eldest son Michael is an exuberant, loveable dreamer with a huge heart and is the glue that holds the family together. James is Michael’s younger brother and best mate, who is a sensitive lad with a secret that he fears will throw his family into turmoil and impact on his career.

"The four actors we’ve cast are all individually brilliant but together they have a truly incredible chemistry. I can’t wait for them to hit the screen!"

popular
These are the top baby names for 2022
Man charged in connection with Ashling Murphy's murder
Teen who pushed girl “head first” under Dart to face trial in adult court
Here are the Covid restrictions that may be lifted as early as next week
Taxi driver who dropped missing woman Bernadette Connolly off comes forward
People are only realising Kendall Jenner and Gigi Hadid are related and the reactions are gas
"This has to end": Vicky Phelan pays tribute to Ashling Murphy
You may also like
5 days ago
Cheer season 2 further highlights the vulnerability of its young stars
1 week ago
Desperate Housewives could be coming back - but what could we expect from a reboot?
2 weeks ago
10 of the best on-screen fashion moments from 2021
2 weeks ago
And Just Like That... episode 5: What's next for Miranda and Che?
3 weeks ago
And Just Like That... episode 4: New friendships are formed and others are lost
4 weeks ago
After three long years, The Apprentice is coming back this January
Next Page