They work for the same TV channel.

All is not well in the ITV boat. On Tuesday night at the National Television Awards, the broadcaster's two flagship morning shows went head to head in the 'Best Daytime' category.

Schofield kissed the ruddy-faced Morgan before the pair shook hands on his way to the stage.

Later, Morgan said his response would be to throw "everything" out of the pram.

GMB said they would "get This Morning back next year" and called for a "second referendum." Banter.

Willoughby added: "This is a special year for This Morning."

That moment when you lose at the NTAs and your own co-workers find it funny... 🤬 pic.twitter.com/uKtepH94ln 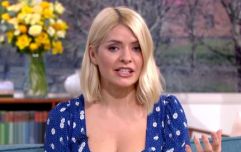 END_OF_DOCUMENT_TOKEN_TO_BE_REPLACED

Holly and Phil have earned the award every year since 2011. Such is their dominance, Piers had promised he would spend a week as a vegan if Good Morning Britain won the award. Which is a good indication of what he thought of his chances.

Morgan had said: "I pledge to go vegan for a week if we win – which could actually kill me.

"You should vote for us really because This Morning always win it and it’s boring that they always win. 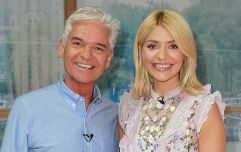 Holly Willoughby suffers back injury live on This Morning

END_OF_DOCUMENT_TOKEN_TO_BE_REPLACED

"They’ve used half naked men to get your vote which is sexist and demeaning and for that reason they should be punished. Our friends at BBC Breakfast didn’t get on the shortlist – just imagine how much that would annoy them if we were to win."

popular
You can now apply for tickets to the Late, Late Toy Show
Irish TikTokers are telling their dads they paid €50 for 'premium air' in their tyres
Shirley Ballas books breast exam after Strictly viewers spot lump
Someone has ranked the penis size of men from all over the world
You are not imagining it – everyone is about to get obsessed with the colour green
Khloe Kardashian has JUST confirmed she is pregnant
Tributes paid to Limerick based blogger and model Patrick McLoughney
You may also like
3 weeks ago
Holly Willoughby launches new lifestyle brand, Wylde Moon
1 month ago
Holly Willoughby in tears after Kate Garraway details Derek's NTA nomination
2 months ago
Holly Willoughby's "favourite" sold out floral dress is back in stock in M&S
3 months ago
Holly Willoughby feared for her children during early pandemic
8 months ago
Dancing on Ice cancelled this week because of too many injuries
1 year ago
Holly Willoughby ROASTED Piers Morgan after he made a comment about her outfit
Next Page