Season 16 of Grey's Anatomy begins in Ireland tomorrow night and the excitement is real.

While it's been on telly in North America for a few months now, it's officially time for Irish fans to check back in with the doctors of Grey Sloan Memorial.

The long-running medical series will kick off tomorrow night [April 1] at 9pm on Sky Witness with a dramatic double-bill.

In case you need a refresher, season 15 ended with Andrew DeLuca in jail after taking the blame for Meredith's insurance fraud - and Grey, Richard Webber and Alex Karev being fired by Miranda Bailey because of the fraud.

Besides the introduction of the new Irish doctor, Dr. Cormac Hayes, the series will also include Karev's departure.

The news comes as it as revealed that Grey's Anatomy would be bringing its 16th season to an early end. 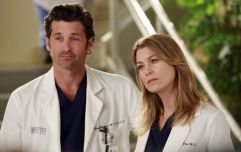 END_OF_DOCUMENT_TOKEN_TO_BE_REPLACED

Production on the series' current season was suspended earlier this month amid the coronavirus outbreak.

However, according to Variety, ABC announced on Friday that the episode set to air on April 9 in North America, the 21st episode of the season, will be this year's season finale.

The long-medical drama has typically aired 24 or 25 episodes per season for the last few years. However, the publication report there are no plans to film any more episode this year.

Girls With Goals || Her · Ep.160: The Beauty Of Coaching - Hayley Harrison joins us from Sport Ireland
popular
More footage of Tristan Thompson cheating on Khloe has emerged
Amy Schumer reveals that her husband Chris Fischer has autism spectrum disorder
Someone has ranked the penis size of men from all over the world
Here's what happens on every day of your menstrual cycle (roughly)
Woman gives birth to nine babies
Here's the average age people lose their virginity around the world
James Franco Has Opened Up About His Relationship With Lana Del Rey
You may also like
3 weeks ago
QUIZ: How well do you really remember the first episode of Grey's Anatomy?
4 months ago
The latest season of Grey's Anatomy is tackling Covid-19 brilliantly
5 months ago
"Not just a cameo:" McDreamy set for more Grey's Anatomy scenes
5 months ago
Spoilers: Grey's Anatomy season 17 premiere brings back OG cast member
6 months ago
Grey's Anatomy's next season could be its last, says Ellen Pompeo
8 months ago
Grey's Anatomy will start shooting season 17 this month and it's the news we needed!
Next Page