For a while there, it seemed like Stranger Things 3 was up in the air after it came out the the Duffer brothers were being sued.

The creators were being sued for apparently copying a movie script.

According to TMZ, a writer named Charlie Kessler said that the plot of Stranger Things is based on a short film he wrote called Montauk.

However, that seems to be all taken care of as Netflix has just released a little promo to let fans know that the next season is indeed going ahead.

The video is simply a little behind the scenes snapshot of the cast all back together again, with names of new and old cast members arising in the clip.

The footage was taken only last week, on April 20, with the likes of Millie Bobby Brown, Finn Wolfhard and Steve Harrington all going into production to read the script. 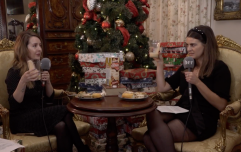 WATCH: We tried eggnog for the first time and have some very important thoughts

END_OF_DOCUMENT_TOKEN_TO_BE_REPLACED

And it seems this season is going to be a bit different than the rest, as executive producer and director Shawn Levy told Variety: "Season 3 is set in the summer, so right out of the gate that's a big difference. The first two seasons were very much school-based.

"This is that time of year where it's not about school, it's about the swimming pool and campfires and parades and Fourth of July and fireworks, so there's kind of a poppy fun to season 3 that's really enjoyable before things inevitably turn super dark."

We cannot wait for it.

popular
5 new additions to Netflix to spend your Saturday night watching
Will Smith admits to 'failing miserably' in 21-year marriage to Jada Pinkett Smith
These €40 Lost Stock fashion boxes are helping support factory workers in Bangladesh
Netflix’s The Claudia Kishi Club is the documentary you need to watch this weekend
5 reasons why Limerick is an ideal staycation destination this summer
Someone has ranked the penis size of men from all over the world
Grizzly: The Irish hard seltzer you're going to be seeing everywhere in 2020
You may also like
6 months ago
WATCH: Meet 88-year-old 'Paddy Christmas' who has become a local hero for his festive lights
7 months ago
WATCH: Kim Kardashian just proved she's the chocolate connoisseur of our generation
8 months ago
Ariana Grande gets permission to sample Kylie Jenner's 'Rise and Shine' lyric
1 year ago
A viral video on how to peel garlic in SECONDS has our minds blown
1 year ago
Hugh Jackman brought this Irish dad on stage last night and fans went WILD
1 year ago
David Beckham posted the sweetest message to the Spice Girls ahead of their Dublin gig
Next Page