The official trailer for the final season of Derry Girls has been released just in time for Paddy's Day.

And, no surprise, it looks absolutely unreal.

END_OF_DOCUMENT_TOKEN_TO_BE_REPLACED

Erin, Orla, Michelle, Clare, and the wee English fella are back for one last hooray - and they're definitely ready to cause even more mischief and get into more trouble than ever.

As well as that, season three looks set to see the crew growing up, ready to get their GSCE, finish school and prepare to take on the real world. We're not sure if we're ready, though.

Things look like they might get a little spicy for Aunt Sarah, as the trailer shows a very attractive new plumber shows up on the family's doorstep.

END_OF_DOCUMENT_TOKEN_TO_BE_REPLACED

"If you're gonna be that hot, you should at least have the common decency to be a bit thick" we hear her say to him.

Unfortunately, there is still no exact air date for the final season yet.

However, we know filming has wrapped - so fingers crossed it will arrive sooner rather than later.

Season three was first announced back in April 2019, but it was delayed due to Covid. Given the delays and the fact that filming's done, we'd place our bets on a Summer or Autumn release. 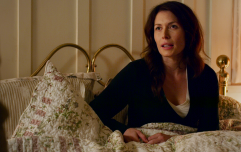 END_OF_DOCUMENT_TOKEN_TO_BE_REPLACED

Nicola Coughlan perviously said the show's emotional ending had her balling her eyes out.

“It's bittersweet, but I think we're sending it off in style.”

You heard her, have some tissues at the ready!

While you're waiting for season three, Derry Girls seasons one and two are available to stream on Netflix now.

popular
Vogue Williams slams man who refused to swap seats with her on plane
Green Party representative calls for a temporary ban of stag and hen parties in Ireland
Ryanair, easyJet and BA issue warning to anyone boarding with smart bag
Katie Piper rushed to hospital for emergency eye surgery
Greg O'Shea actually left Love Island to go to his granny's funeral
Georgia Toffolo rumoured to be returning to jungle for I'm A Celeb All Stars
Here's how you can get "free money" from Revolut
You may also like
1 week ago
Everything you need to know about Netflix's I Just Killed My Dad
3 weeks ago
Netflix confirm That 70s Show spin off series
3 weeks ago
Virgin River fans have a brand new theory about Charmaine's babies
3 weeks ago
Everything we know so far about Bridgerton season 3
4 weeks ago
PSA: There's a Shania Twain documentary coming to Netflix
1 month ago
Girl in the Picture: Netflix's new true crime documentary is absolutely terrifying
Next Page