After a historic day for Irish talent at the Oscar nominations announcement, Barry Keoghan has dedicated his honour to his baby son Brando.

Barry was nominated for Best Supporting Actor for his performance as Dominic in Martin McDonagh's The Banshees of Inisherin. His co-star Brendan Gleeson joins him in the category, along with Ke Huy Quan for Everything, Everywhere All At Once, Eddie Redmayne for The Good Nurse, Albrecht Schuch for All Quiet on the Western Front and Michael Ward for Empire of Light. 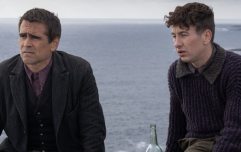 END_OF_DOCUMENT_TOKEN_TO_BE_REPLACED

Barry took to Instagram to celebrate his win, which he dedicated to his son Brando.

"This one's for you Brando," he wrote. "Daddy loves you."

Barry and his partner Alyson Sandro welcomed their first child together last August.

There was major success for Irish talent outside of the Best Supporting Actor category as well. Kerry Condon was nominated for Best Supporting Actress for her role as Siobhan in The Banshees of Inisherin. Colin Farrell received his first ever Oscar nomination for Best Actor in a Leading Role for playing Padraic in the film. 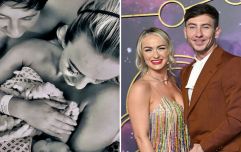 END_OF_DOCUMENT_TOKEN_TO_BE_REPLACED

In total, The Banshees of Inisherin was nominated for ten awards. As well as the acting categories, it's up for Best Picture, Best Director, Best Original Screenplay, Best Film Editing and Best Original Score.

History was also made when Colm Bairéad's An Cailín Ciúin picked up a nomination for Best International Feature Film, making it the first Irish language film to do so. 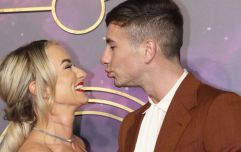 Barry Keoghan and girlfriend Alyson welcome their first child together

END_OF_DOCUMENT_TOKEN_TO_BE_REPLACED

It was a huge night for Paul Mescal as well, as he picked up his first ever Oscar nomination for Best Actor in a Leading Role for his performance as Calum in Charlotte Wells' Aftersun. As well as Colin Farrell, he faces competition from Austin Butler for Elvis, Brendan Fraser for The Whale and Bill Nighy for Living.

popular
Bride asks for divorce day after wedding following groom's disrespectful cake stunt
Natalie Imbruglia's Torn is actually a cover and the original just isn't the same
Head of dive squad searching for Nicola Bulley thinks 'something's not right'
Gwen Stefani reportedly pregnant with baby number four
Tributes paid following tragic death of Emma Pattison and her family
Here's why Nicola Peltz-Beckham's family are suing her wedding planners
Has the Call Her Daddy podcast just pulled the best marketing stunt of all time?
You may also like
7 months ago
Barry Keoghan confirms his girlfriend is pregnant with their first child
10 months ago
It looks like Irish actor Barry Keoghan is set to be a dad
1 year ago
Actor Barry Keoghan hospitalised following assault in Co. Galway
3 years ago
Barry Keoghan shares a gushing Instagram post about his girlfriend on her birthday
3 years ago
There's a biopic about Shane MacGowan coming and Barry Keoghan is playing him
4 years ago
A post-apocalyptic sci-fi TV series starring Barry Keoghan is in the works
Next Page