Patching things up with her seems to be his biggest priority.

Coleen and Wayne Rooney's marriage is said to be rocky after the footballer was found guilty of drink-driving and sentenced to a two-year driving ban.

The 31-year-old was reportedly driving home Laura Simpson, a girl he had met while out that night, which is said to have put extra strain on the relationship with his wife Coleen who was on holiday with their kids at the time. 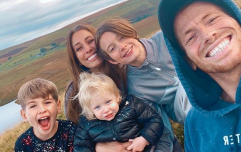 END_OF_DOCUMENT_TOKEN_TO_BE_REPLACED

While pregnant Coleen has since been spotted without her wedding ring on a number of occasions, Wayne is reportedly planning something big to win her back.

And, if reports are to be believed, the Everton striker is planning to pop the question again in the Greek islands.

The dad-of-three is said to be planning to take Coleen to Mykonos, where they were last a happy family in June.

"Wayne thinks that if he can get Coleen away on her own, he can win her over.

"He's got all these ideas - rose petals on the bed, romantic baths together, walks on the beach.

"He's even willing to propose again with a new ring, to try to erase his mistakes and his past.

"He'll suggest renewing their vows - anything to get Coleen to forgive him. It's something he wants to do privately, to prove his love for Coleen."

The couple, who tied the knot in 2008, confirmed in mid-August that they were expecting their fourth child together.

They are already parents to sons Kai, Klay and Kit.

popular
How to turn 20 days of annual leave into 50 days off
Richard Madeley under fire for comments about Kate Middleton's waist
Man arrested after woman raped on train as passengers filmed it
WATCH: The first trailer for Ozark Season 4 just dropped
70-year-old woman reportedly becomes first-time mum after welcoming baby boy
Police search for missing 4-year-old girl in Australian outback
Police launch investigation after woman "spiked with needle" in UK nightclub
You may also like
1 year ago
Rafael Nadal got married at the weekend, and his bride looked like a full on PRINCESS
2 years ago
Leona Lewis got married, and her wedding dress was absolutely STUNNING
3 years ago
'Nightmare!': Denise Richards' wedding dress has caused a SERIOUS debate online
3 years ago
Actress Claire Holt just got married and her wedding dress is the stuff of DREAMS
3 years ago
Kate Upton's STUNNING wedding venue is the stuff of bridal dreams
3 years ago
Ellen Page announces she's married with the sweetest Insta post
Next Page