Ugly Betty star America Ferreira got a little more than she bargained for at Cannes this week, when a prankster crashed the red carpet and crawled under her gown.

The incident occurred before the première of How To Train Your Dragon 2 at the prestigious film festival, when Ukrainian journalist and notorious prankster Vitalii Sediuk crept under the skirt of Ferreira's white Georges Hobeika Couture gown as she posed with co-stars.

The actress voices the character of Astrid in the film and initially seemed unaware of the stunt, until security dragged the man from under the dress and removed him from the venue.

He was later arrested. 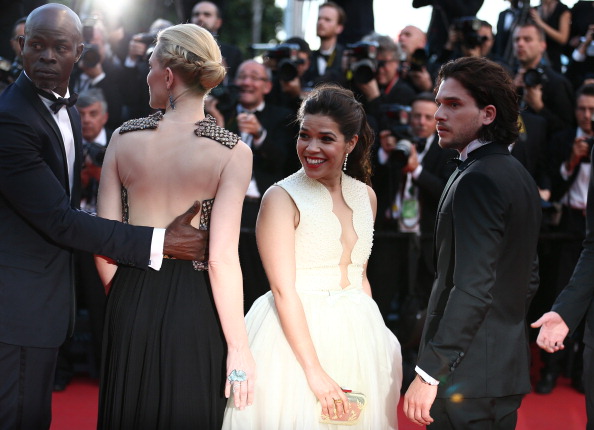 
popular
Say hello to the €40 M&S dress that will instantly brighten your spring wardrobe
Meghan and Prince Harry issue statement after agreement to leave the royal family is confirmed
The €30 New Look skirt we're going to be living in for the next few weeks
Groom calls his fiancée a 'toddler throwing a tantrum over a sparkly toy' for not wanting to buy a €90 wedding dress
Apparently, this is the unique name Conor McGregor and Dee Devlin gave their second child
Emmerdale 'confirm' when Graham Foster's killer will be revealed
Brad Pitt JUST responded to speculation about his relationship with Jennifer Aniston
You may also like
11 months ago
Turns out, this colour of wine gives you the WORST hangover
3 years ago
Lily Allen has revealed that she was stalked for seven years
3 years ago
Pretty Little Liars actor Brandon Jones could be facing over five years in prison
3 years ago
Gwen Stefani Receives Massive Backlash After "Insulting" April Fools' Prank
3 years ago
Katie Price Names And Shames The Twitter Trolls Bullying Her Son Harvey
3 years ago
Kim Kardashian Blasts "Body-Shaming and Slut-Shaming" In Brilliantly Honest Post
Next Page