A shrine to Harry Styles has been erected on a busy Los Angeles road this week and the reasons behind it are a bit (excuse the pun) sick.

The shrine was put up by obsessed One Direction fans at the spot on the road where, according to The Sun, Harry Styles pulled over to vomit after a night of partying.

Harry was reportedly enjoying a night on the town with Lily Allen when he asked his driver to pull over so that he could get sick.

END_OF_DOCUMENT_TOKEN_TO_BE_REPLACED

Now, fans have hung an adoring banner at the site which reads, “Harry Styles threw-up here 10-12-14.”

This is not the first time the singer has thrown up in public, as he also got sick on stage in Pittsburgh last year – which he put down to eating too much before the show. 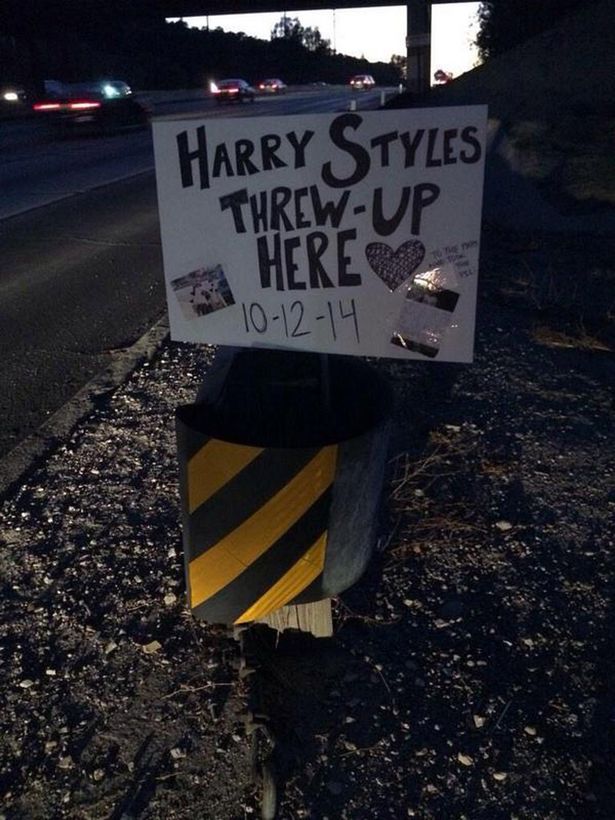 The shrine to Harry's vomit. (Pic via Twitter @McKinleyMariles)

popular
Airport outfits are all the rage as we head abroad - here are the 4 best ones
So it seems Ekin-Su once competed as Miss Ireland before Love Island fame
Penneys has a perfect dupe for Charlotte Tilbury's Flawless Filter foundation
Gemma Owen gets to know Jack Keating as her head turns on tonight's Love Island
WATCH: The moment dad attacks 3-year-old son's suspected murderer in court
A 'hangover pill' has just gone on sale in the UK - and they ship to Ireland
Love Island's Gemma finally tells villa about dad Michael Owen on TV
You may also like
3 years ago
Turns out, this colour of wine gives you the WORST hangover
6 years ago
Pretty Little Liars actor Brandon Jones could be facing over five years in prison
6 years ago
Gwen Stefani Receives Massive Backlash After "Insulting" April Fools' Prank
6 years ago
Katie Price Names And Shames The Twitter Trolls Bullying Her Son Harvey
6 years ago
Kim Kardashian Blasts "Body-Shaming and Slut-Shaming" In Brilliantly Honest Post
6 years ago
WATCH: Emma Watson Launched HeForShe Arts Week On International Women’s Day
Next Page